I think the first time I had this was at De Cecco (now called Vicino) in Parsons Green in London and it has been a favourite ever since. The key is the lobster stock that many recipes miss. The key elements are Lobster Stock, Lobster (in case you had not guessed), fresh Tomato Sauce and Linguine. The recipe is for four people.  It is of course ideal to use fresh and local lobster – well to the country you are in – but I have used frozen lobster and it still tastes good. You will make more stock than you will need but it can be poured into ice trays and frozen to be bagged for later use.  And it is a great ingredient for other seafood dishes – including another favourite langoustines in a champagne sauce but that is another story. 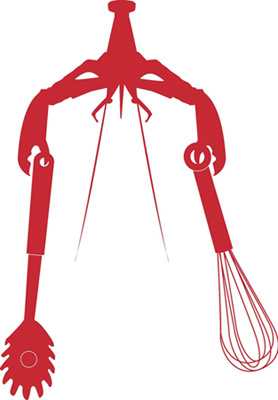 Lobster:
- one 1.5lb / 750gm lobsters (or larger if you prefer)
If pre-cooked, remove all the meat chopping the tail into bite size pieces but leaving the claw meat in its distinctive shape. Make sure you get all the meat from the legs as well. If using live lobster, par-cook as follows: bring a large pan with one inch of salted water to the boil and then put the lobster in head first, cover and bring back to the boil for no more than four minutes before taking out and putting in a large bowl of cold water (to stop the cooking process) and allowing the lobster to cool until it is just warm to the touch before removing the meat. If using fresh frozen lobster, then simmer for approximately 10 minutes before dropping in cold water etc.

Lobster Stock:
- lobster heads and empty claws
- two small leeks chopped
- one baby fennel chopped in two (optional)
- one stick of celery, roughly chopped
- one large (ish) carrot roughly chopped
- a small handful of flat leaf parsley
- two cloves of garlic, chopped in half
- two bay leaves
- a small handful of basil leaves
- 1 tablespoon / 15ml extra virgin olive oil- 1.5 pints / 710ml water- 8 tablespoons / 125ml dry white wine
Heat the oil and fry all the ingredients for three or four minutes until starting to brown, add the white wine and simmer for three or four minutes; then add the water and simmer for 40 minutes or so. Sieve or strain into another pan and keep warm; discarding all but the liquid.

Tomato Sauce:
- fresh plum tomatoes, 600 g (21 oz); skinned, dee-seeded and roughly chopped (to skin, place in a bowl and cover with boiling water and leave for a minute or so, remove, let cool and then peal off the skin) PS: if cannot get fresh use Italian tinned ones.
- one medium onion, peeled and cut in half
- salt
- 75g (2.5 oz) butter
Put tomatoes, butter, onion and salt into a pan and simmer for 40 minutes. Check regularly and break up any chunks of tomato as it goes along. Taste and adjust seasoning, remove the onion and keep warm.

Linguine:
Cook according to the instructions – I prefer dried pasta – but add a splash of olive oil to the water before adding the linguine, until al dente (firm but not hard); drain, put back in the saucepan, add a knob of butter and a little black pepper before covering to keep warm.

Lobster:
Pour some extra virgin olive oil into a hot frying pan, add one clove of finely chopped garlic and the lobster meat. Seal the lobster for few seconds and then add a splash of white wine. Allow it to reduce and then add one ladle of the stock and one ladle of tomato sauce, stir through and serve on the linguine – preferably at the New England, Hamptons or Punta Del Este Beach House!.

TIP: if using a live or fresh frozen lobster cook this first then make the stock and tomato sauce at the same time, then cook the linguine and finally finish the lobster sauce as it only takes a couple of minutes and you want to make sure you do not over cook the lobster. Sorry the recipe seems so long, but actually very simple – it makes a great beach house lunch or a pretty impressive dinner.

PS: If anyone wants to know how to remove the meat from a whole lobster let me know and I will post.

Thanks to and smith for the use of the ‘cooking lobster’.